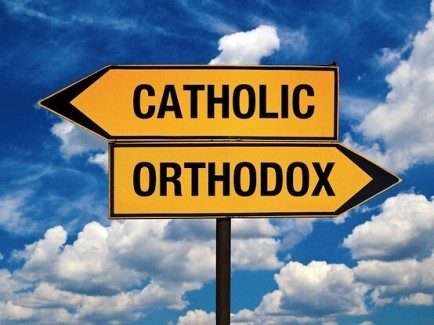 The Orthodox and Roman Catholic Church share a rich common one thousand year history.  Until the year 1054 the worldwide Christian Church was one, undivided and united, with five major sees, Rome, Constantinople, Antioch, Jerusalem and Alexandria.  These sees were major cities in Christendom.  In the year 1000, there was no internet, no email, no fax or email.  Geographically Rome was isolated from the other major sees of Christendom and eventually the Christian East (Orthodoxy) and Christian West (Roman Catholicism) grew apart and became estranged.

The Church in the East functioned in a conciliar manner, keeping each other in check when it came to doctrine.  If one bishop made an error, there were many other bishops around to correct it and to keep each other in check.  Rome did not have this advantage.

Rome, in isolation from the Christian East, developed an exaggerated sense of authority.  In the Christian East the bishops always gathered around a round table to discuss things.  There was no head to the table, just a first amongst equals who would lead the deliberations, and ahs only one vote.  In the Christian West, the Pope sat at the head of the table and the buck stopped with him.  Appealing to Mt. 16:16 and 16:18, the Pope asserted his primacy and can impose his will upon his brother bishops.  He is the bishop of bishops.  In Orthodoxy there never developed a “bishop of bishops.”

The Orthodox Church affirms the primacy of the Pope as “the first amongst equals.”  While this is an oversimplification, had this development in the papacy not taken place, perhaps the Christian Church today would have remained undivided.

As Orthodox Christians we understand the Roman Catholic Church to be Apostolic.   Unlike Protestantism, which exists in protest to the mistaken practices of the Medieval Roman Church, the Orthodox Church does not exist in protest to Rome.  Simply and tragically communion has been broken.

A major difference between Orthodoxy and Roman Catholicism is its approach to theology.  The Roman Catholic Church has precise definitions and a rather legalistic view of things compared to Orthodoxy.  For the Orthodox there is less concern to describe the ineffable and incomprehensible.  Orthodoxy is all about experiencing God.

Below is a brief summary of the differences between Orthodoxy and Roman Catholicism.  Some are more recent innovations.

Filioque: From the Latin meaning “and the Son” added unilaterally to the Nicene(325) and Constantinopolitan (381) Creed.  The original text which the Orthodox use says “I believe in the Holy Spirit, the Lord, the Giver of Life, which proceeds from the Father.”  (cf. Jn 15:26).  To this sentence in 589 at the Council of Toledo in Spain, “and the Son (filioque)” was added to the Creed and gradually spread across Europe.  This addition was a partial response to Araianism.  This addition to the Creed was the dogmatic ground for the separation of the East and West.

Indulgences: The issue of selling indulgences is what sparked the flames of the Protestant Reformation.  An indulgence is the full or partial remission of temporal punishment due for sins which have already been forgiven.  Orthodoxy views this as a mechanical and legalistic approach to sin and is foreign to the spirit of the Gospel.

Purgatory: According to the Catholic encyclopedia “Purgatory, (Lat., “purgare”, to make clean, to purify) is a place or condition of temporal punishment for those who, departing this life in God’s grace are not entirely free from venial faults, or have not fully paid the satisfaction due to their transgressions.  Purgatory exists to the second coming of Christ.”  This is not an Orthodox doctrine.  We do believe there is a state of rest for the soul to be in until the second coming of Christ.

The Roman Catholic Doctrine of Original Sin arises from St. Augustine using a corrupted Latin translation of Romans 5:12.  This Doctrine says that we are in a sense “born guilty” and that is why unbaptized babies are not in heaven.  Ironically, Protestants ascribe to various forms of the doctrine of Original Sin, yet it is unbiblical.

(1854) Immaculate Conception The dogma that “from the moment of her conception the Blessed Virgin Mary was by the singular grace and privilege of Almighty God  and in view of the merits of Jesus Christ, Savior of mankind, kept free from all stain of original sin.” (Bull Ineffabilis Deus of Pope Pius IX, 8 Dec 1854).

The logic is that if we are all are born guilty of Original Sin, Mary would be stained with the guilt of Original Sin and when Jesus was born, He would have been born with this stain, thus the need for this  dogma.

(1870) Papal Infallibility This Roman Catholic doctrine arises from the continuing exaggeration of the authority of the Pope.  In summary, when the Pope speaks ex cathedra i.e. officially on matters of faith, he is preserved from error by the action of the Holy Spirit.

(1950) Assumption of the Mother of God This doctrine says that the Virgin Mary upon death ascended into heaven body and soul.  The Orthodox celebrate the Dormition (falling asleep) of the Mother of God and it is totally plausible that she was assumed like Elijah, but for the Orthodox this type of doctrine does not arise to the level of a dogma, a required belief.

Recommended Reading: Orthodoxy and Roman Catholicism: What are the Differences?  by Fr Theodore Pulcini 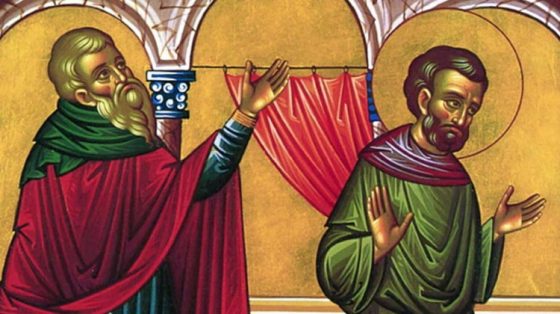